EXCESSIVE HEAT ADVISORY IN EFFECT FROM 11 AM TO 8 PM CDT TUESDAY…
* WHAT… Dangerously hot conditions are expected with heat index values ​​up to 103.
* WHERE…Hennepin, Anoka, Ramsey, Washington, Carver, Scott, and Dakota Counties.
* WHEN… 11 AM to 8 PM CDT Tuesday.
* IMPACTS… Extreme heat and humidity will significantly increase the potential for heat-related illness, particularly for those who work or participate in outdoor activities. PRECAUTIONARY/PREPAREDNESS ACTIONS…
Drink plenty of fluids, stay in an air-conditioned room, stay out of the sun, and check on family and neighbors. Small children and pets should never be left unattended in vehicles under any circumstances. Take extra precautions if you work or spend time outdoors. Whenever possible, reschedule strenuous activities for the morning or evening. Learn the signs and symptoms of heat exhaustion and heat stroke. Wear light, loose clothing when possible. To reduce risk during outdoor work, the Occupational Safety and Health Administration recommends scheduling frequent breaks in shaded or air-conditioned environments. Any person overcome by heat should be moved to a cool, shaded place. Heat stroke is an emergency! Call 911. 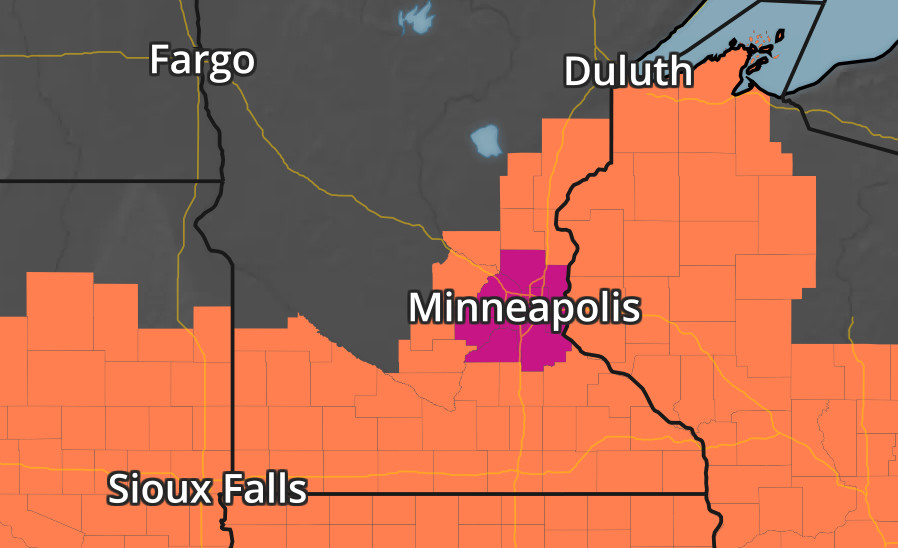 These are the highest heat index values ​​in the region today, showing triple-digit readings for some, including the Twin Cities. Tuesday’s heat will be quite dangerous if not taken seriously. 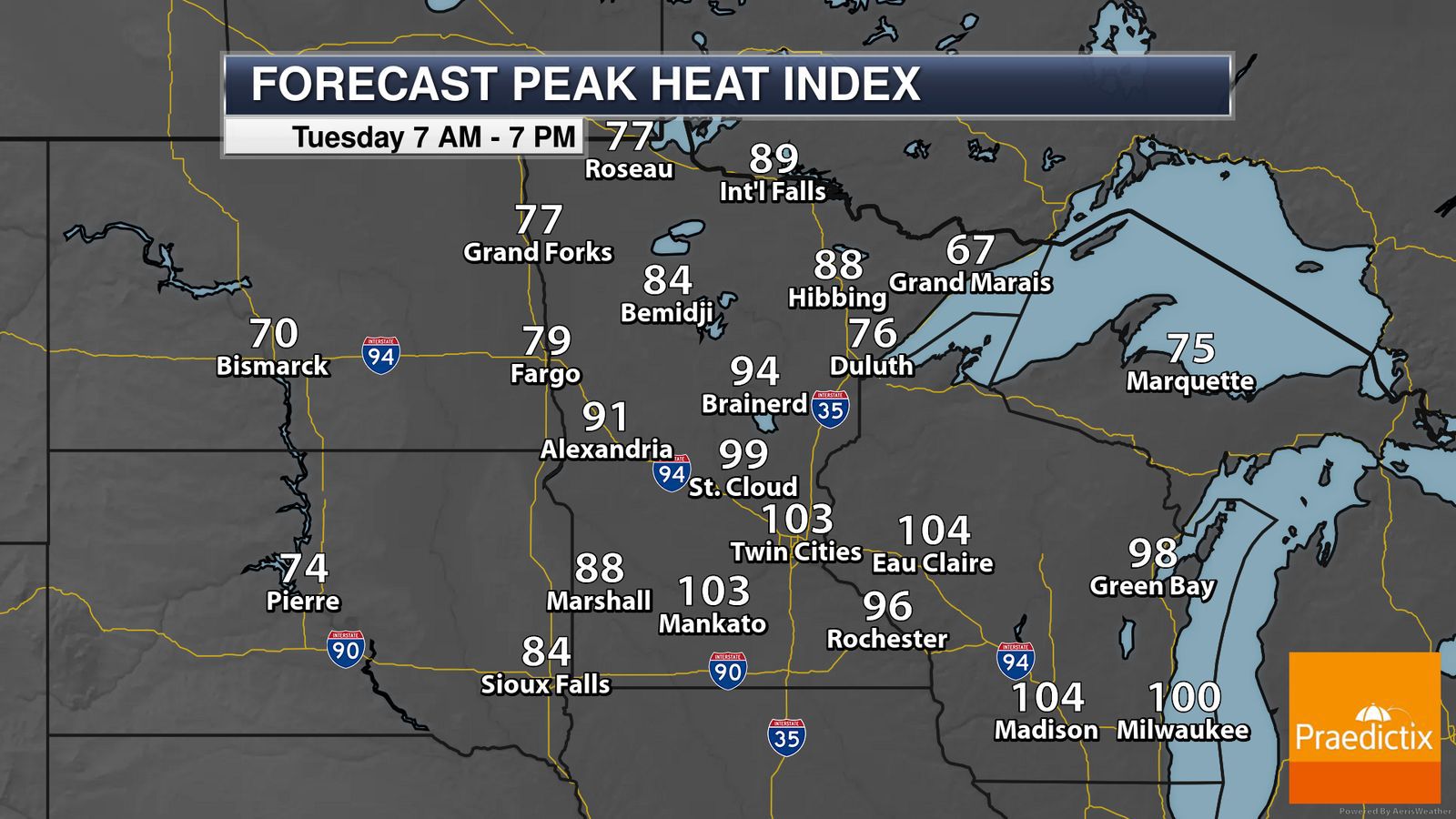 Here’s a look at the highs in the region on Tuesday. Temperatures will be well above average, with highs warming in the 80s and 90s. The Twin Cities could get hot in the mid/upper 90s, which will be about +15F to +20F above average and potentially the hottest day of the year and the hottest day since last June. If we hit 100F, it would be the first time since May 28, 2018. 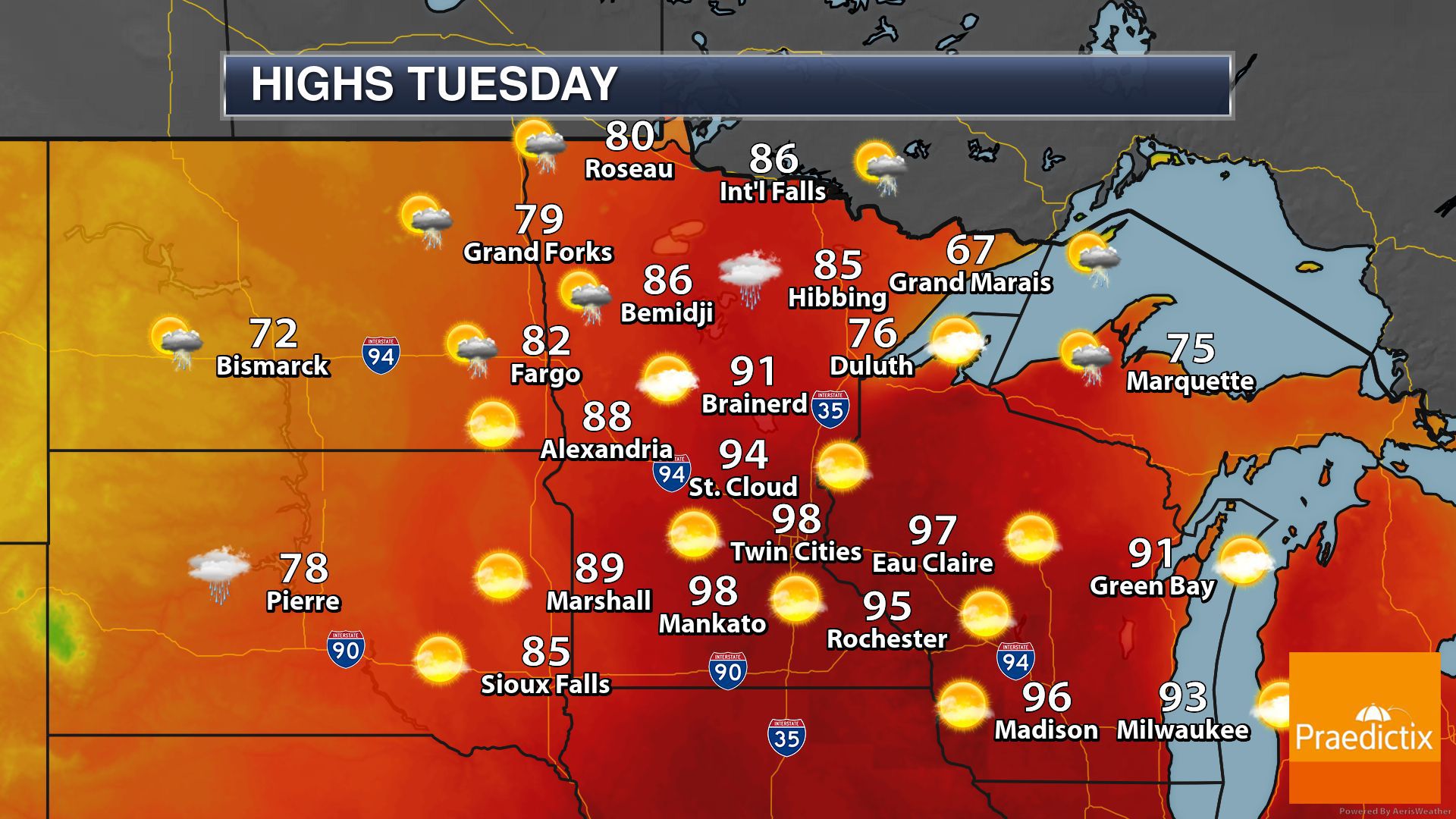 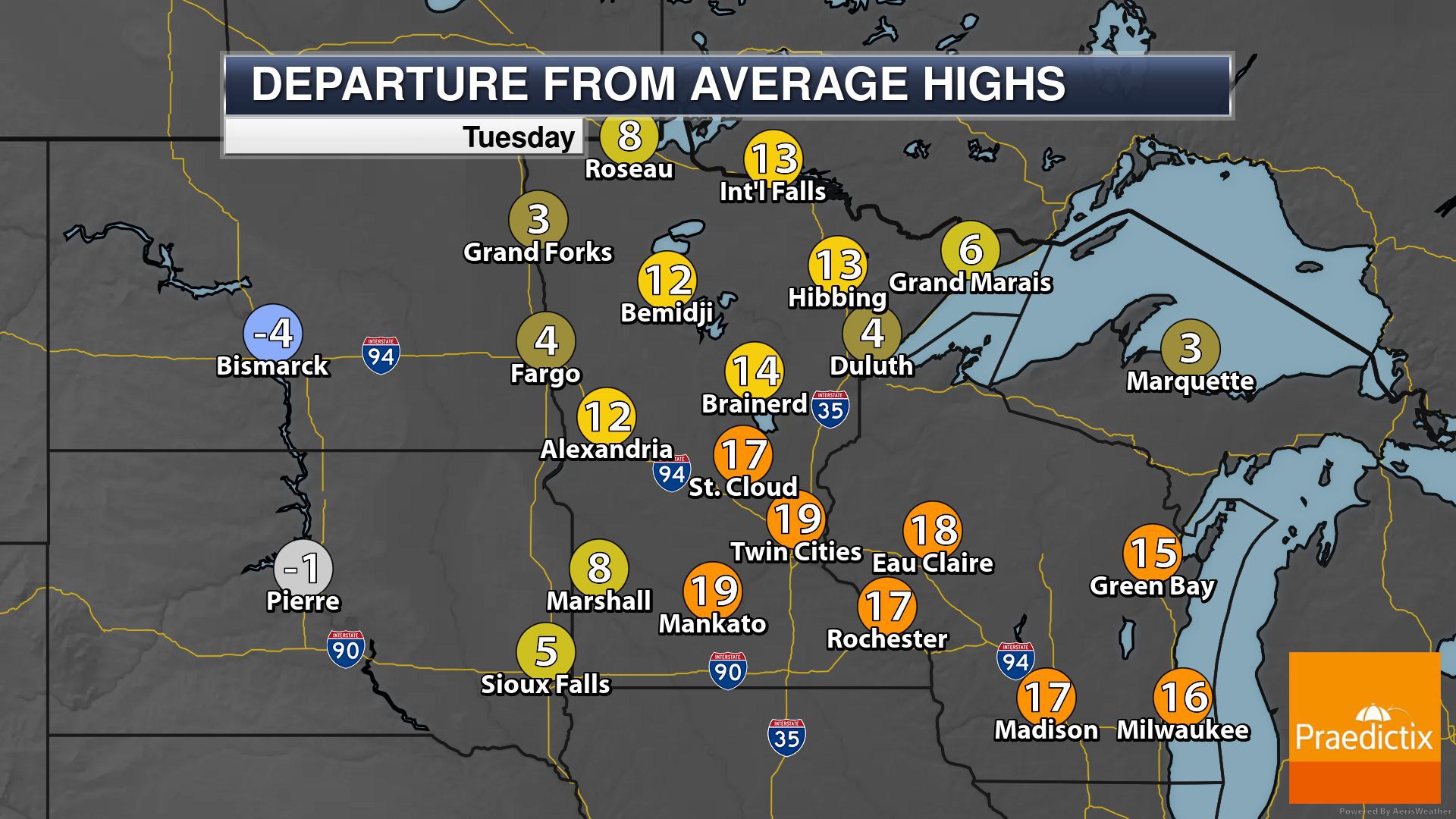 Here are the 10 warmest days of 2022 so far in Minneapolis. Note that we’ve only gotten to 90F or higher twice. 92F was the warmest day on May 12. The forecast for Tuesday is in the mid/upper 90s and if it holds, it will be the warmest day of the year so far. Last year, there were 12 days in June that heated up into the 90s. 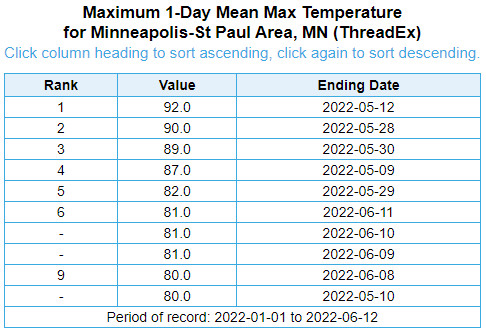 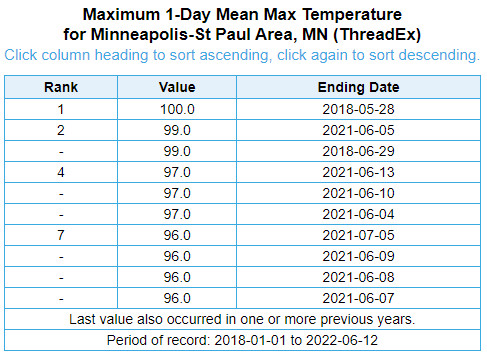 Here is the weather forecast from Tuesday morning to Sunday afternoon. After a hot Tuesday, showers and thunderstorms will be possible Tuesday night through early Wednesday, primarily south and east of the Twin Cities. The remainder of the forecast period appears to be mostly dry with some chance of rain in northern Minnesota.

Here is the rain potential for the weekend through Sunday afternoon. Showers and thunderstorms will be possible south and east of the Twin Cities Tuesday night through Wednesday, with nearly 1″ of rain in places, especially in the extreme southeast of the state. 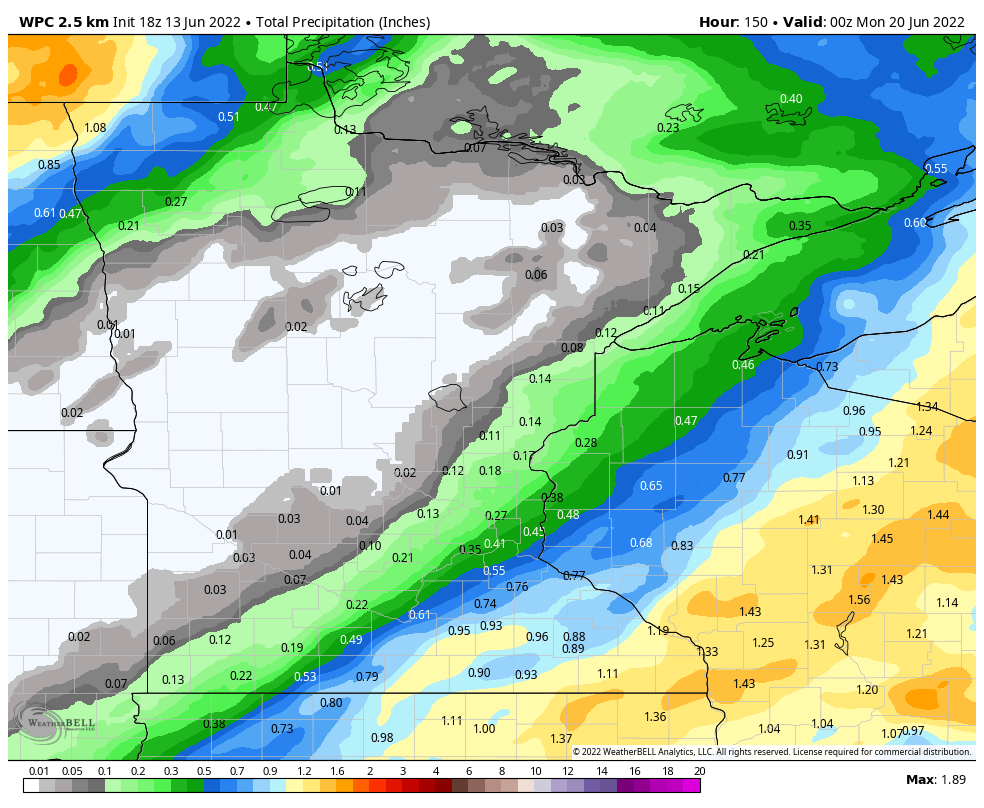 Thanks to above-average rainfall so far this year, we have eliminated much of the drought that was present at the beginning of the year. In fact, in early January, nearly 10% of the state in northern Minnesota was considered to be in severe drought. Now only 3% of the state is considered abnormally dry. 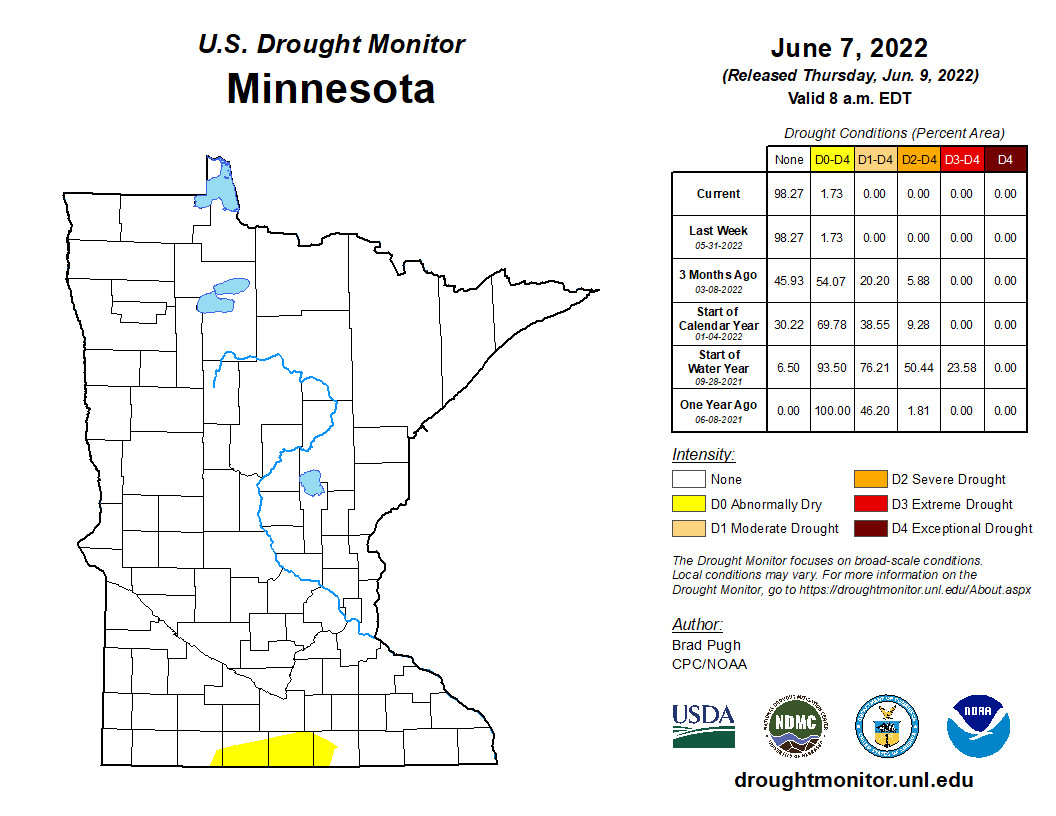 The weather outlook for Minneapolis on Tuesday shows high temperatures warming into the mid/upper 90s, which will be almost +20F above average. By the way, the Twin Cities record on June 14 is 98F, so we could tie a record. 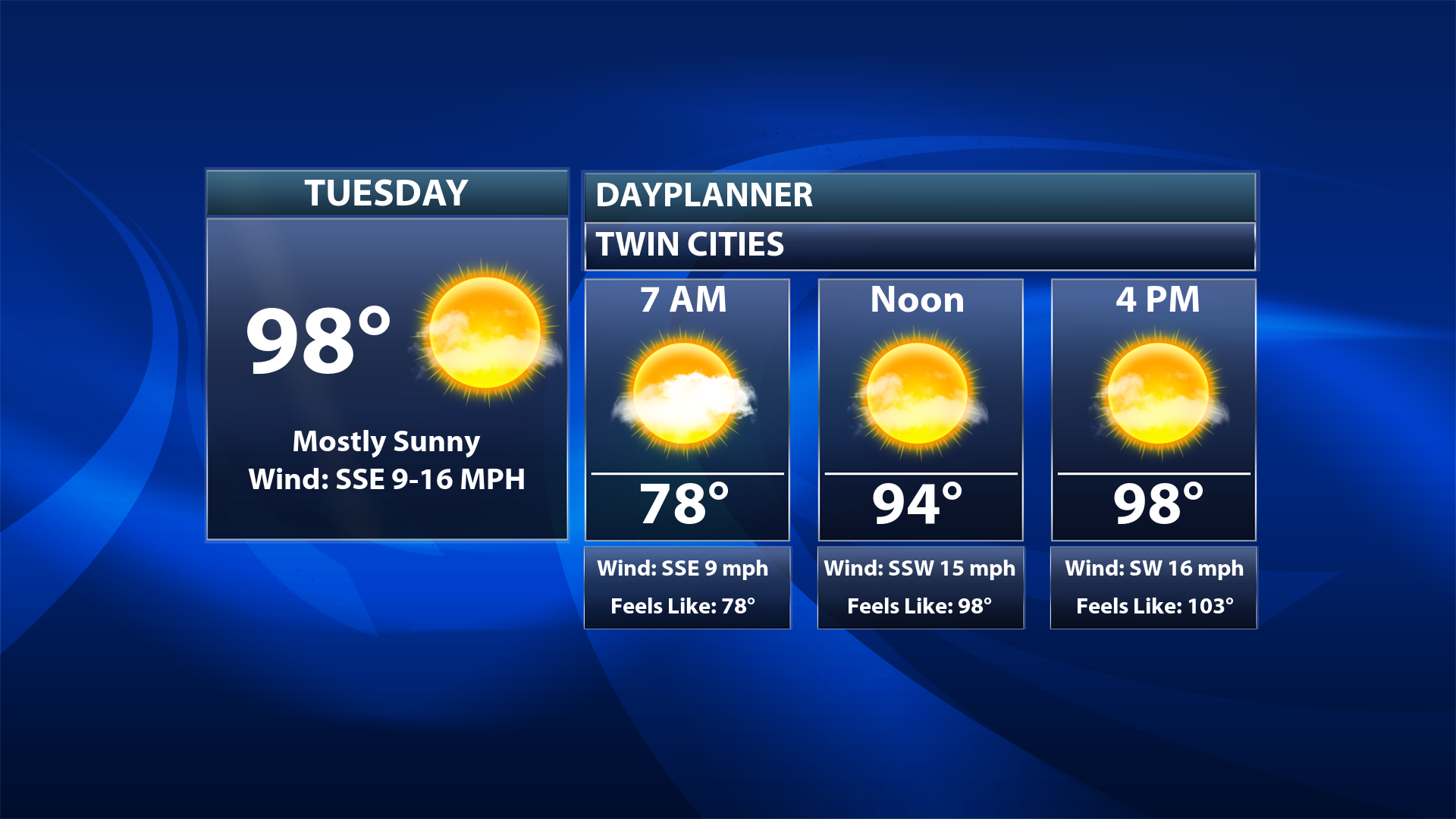 Hourly temperatures for Minneapolis on Tuesday show temperatures starting in the mid/upper 70s in the morning and warming up to the mid/upper 90s in the afternoon. Not only will there be a potential record warm low on Tuesday, but there will also be a potential record high during the day. Winds from the south will also be a bit gusty with gusts approaching 25 mph to near 30 mph. 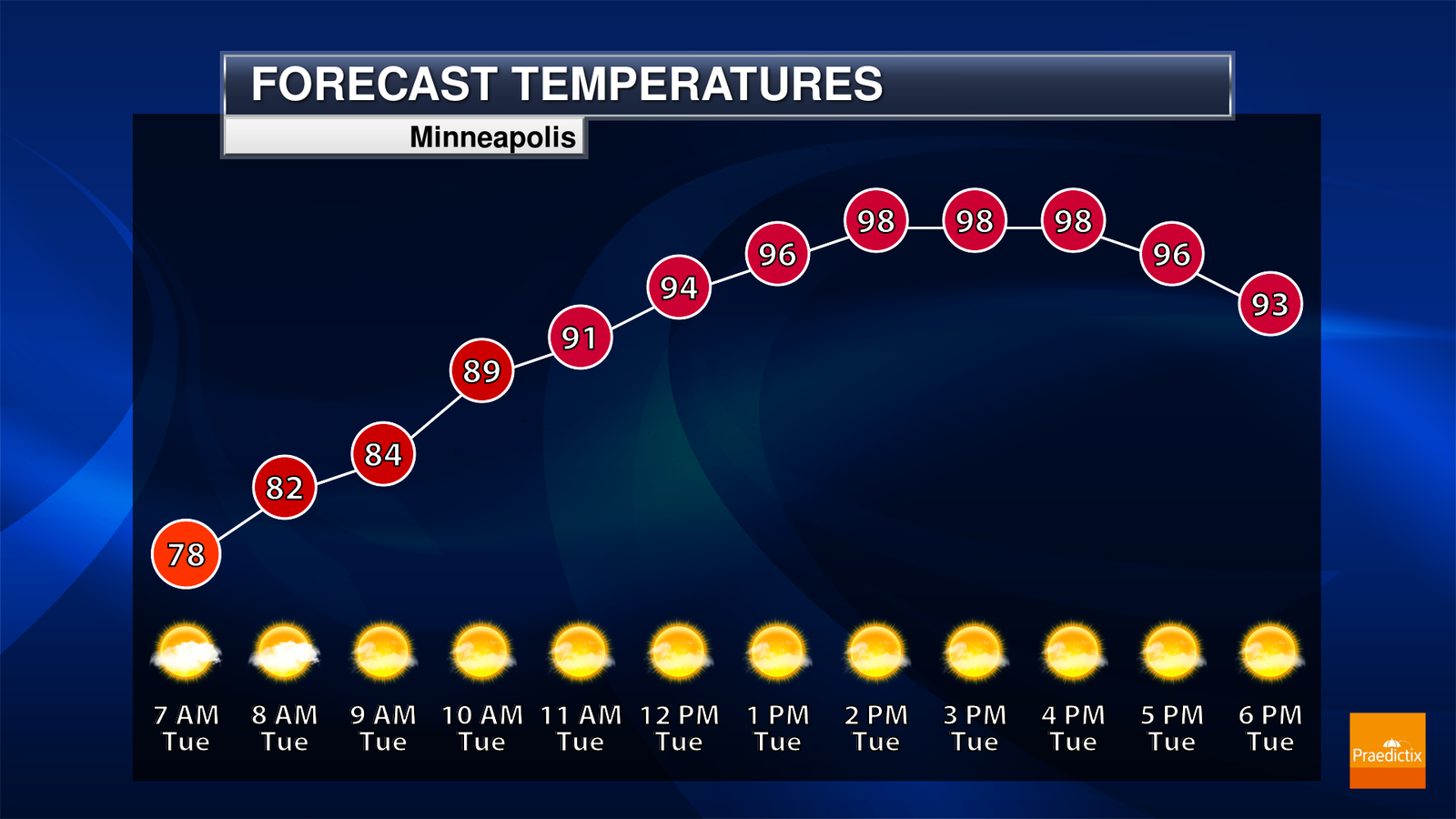 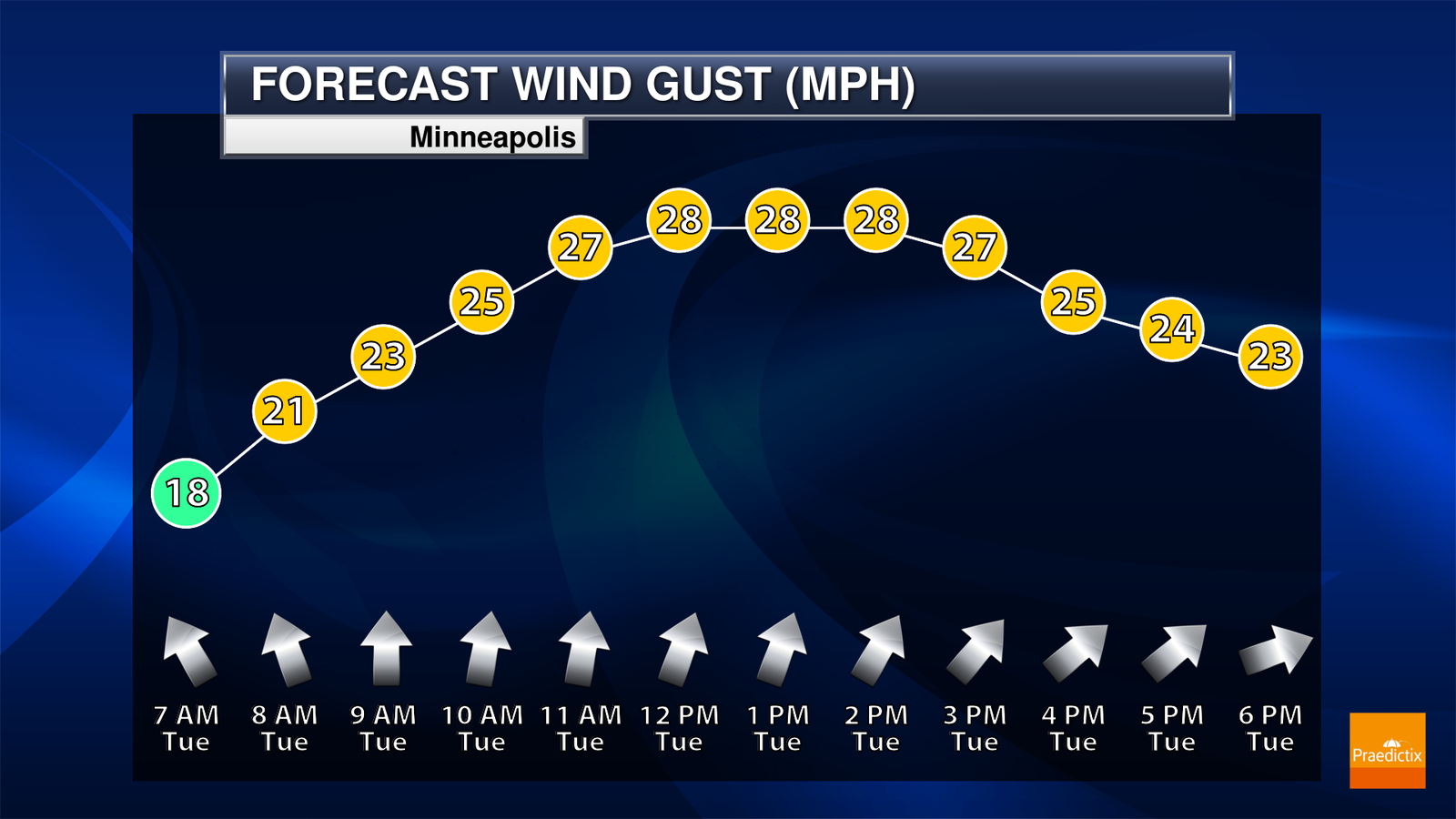 The extended temperature outlook for Minneapolis shows temperatures well above average Tuesday with highs near 100F. It will be a little closer to average by midweek before readings pick up again this weekend and early next week. 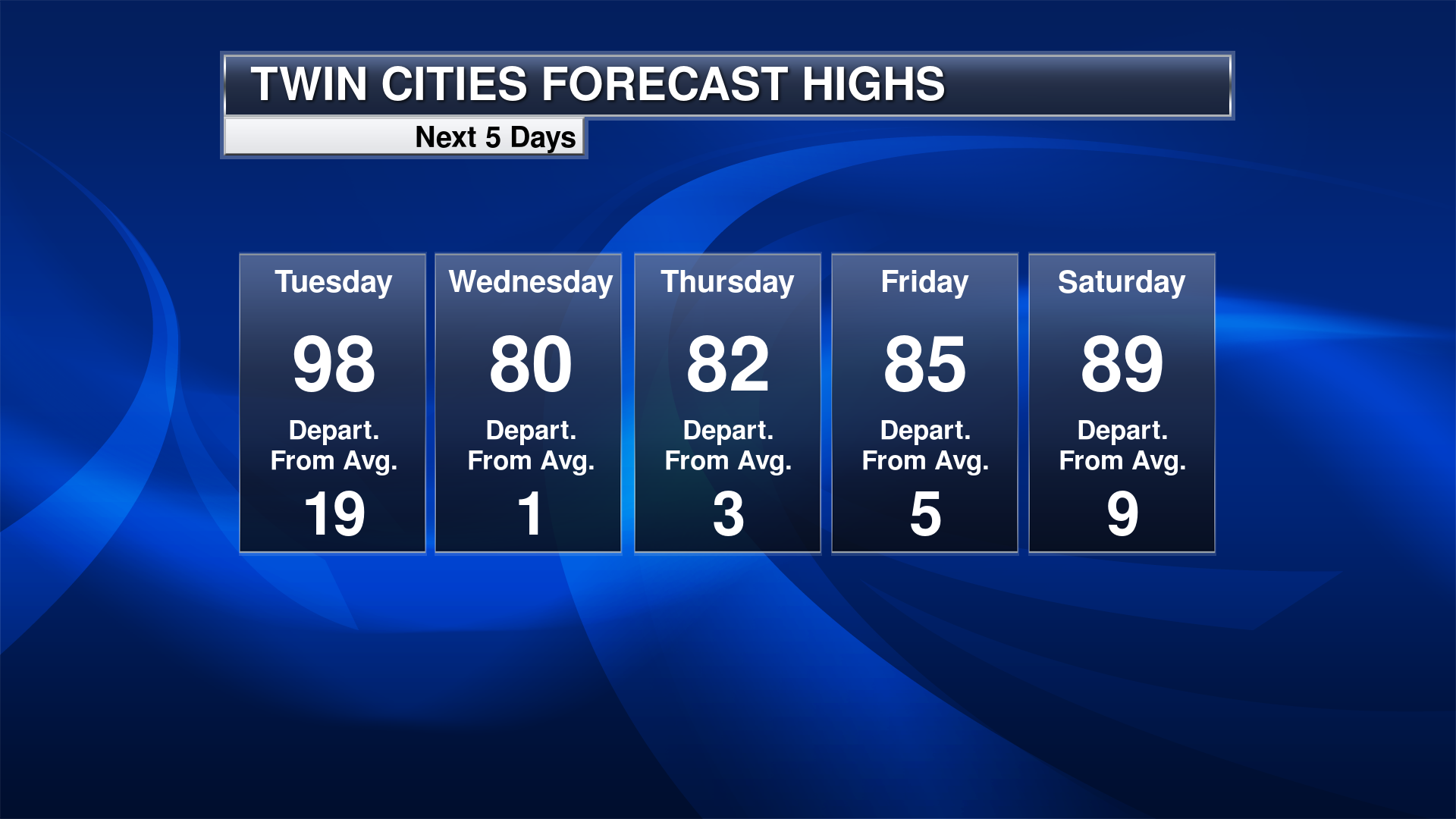 The extended weather outlook for the next 7 days shows a chance of showers and thunderstorms Tuesday night through Wednesday. The rest of the week looks mostly dry with temperatures warming to well above average levels again late in the weekend and early next week. 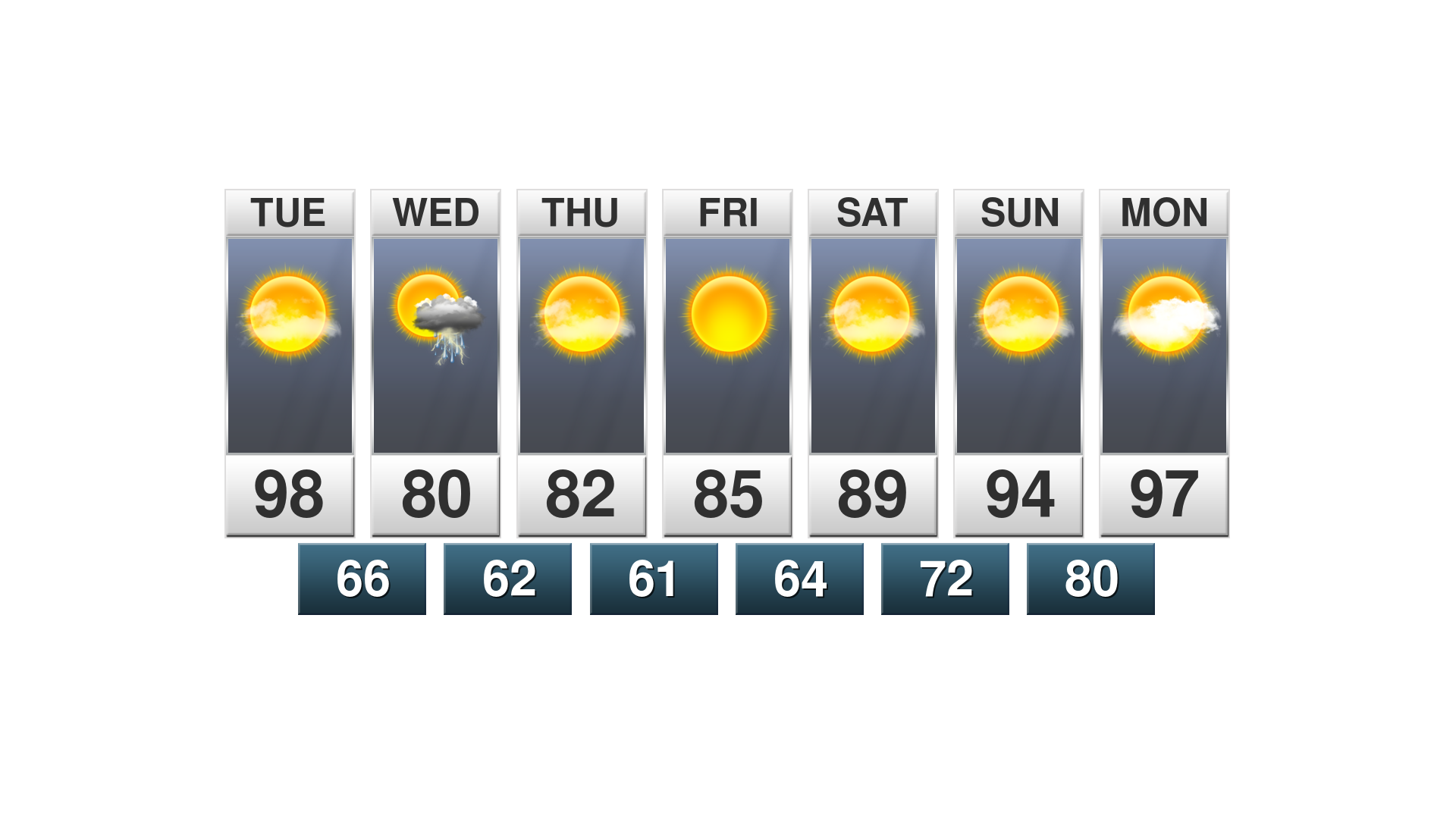 According to the ECMWF and GFS Extended Temperature Outlook, temperatures will be high on Tuesday with highs in the 90s. We will cool down to near normal levels for the second half of the week, but the 90s will be possible again for a few days. from the weekend until next week. 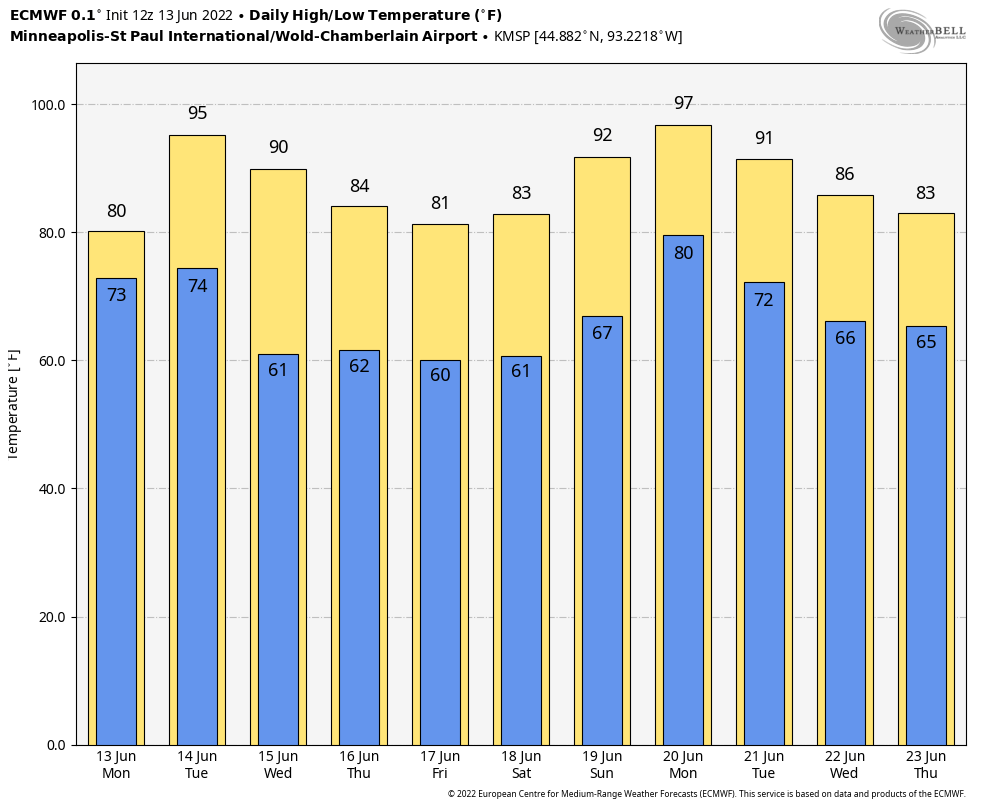 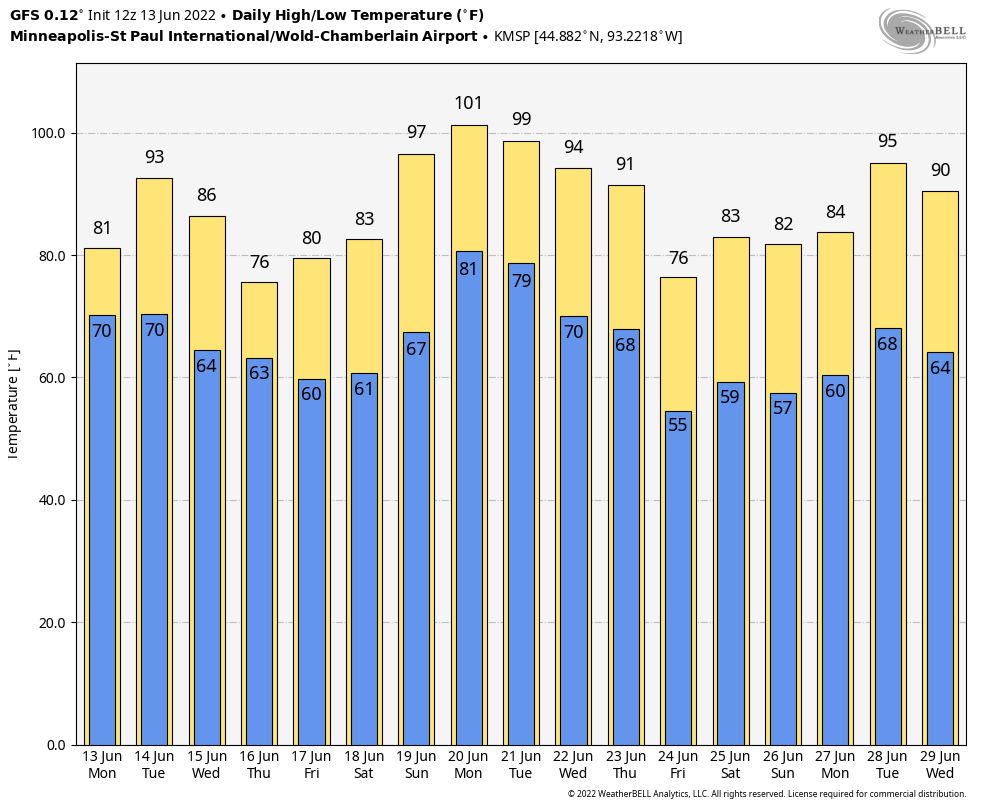 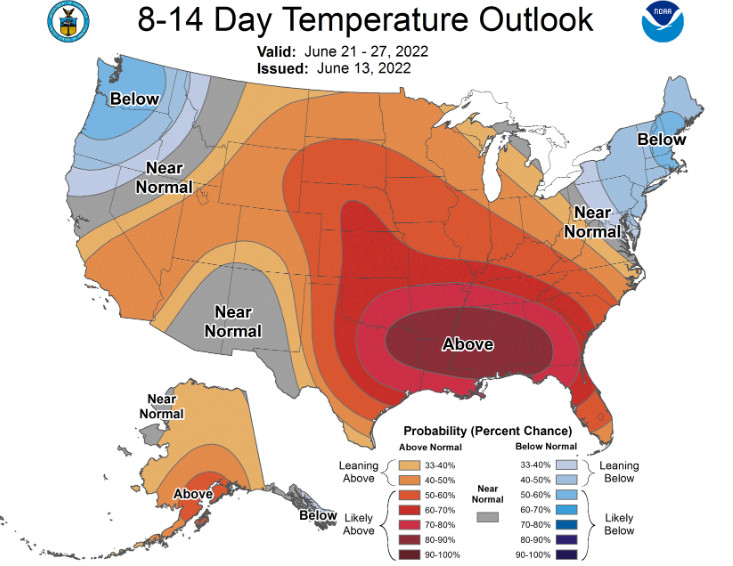 According to NOAA’s Climate Prediction Center, the 8- to 14-day rainfall forecast shows drier weather across much of the central and eastern US. The southwestern US could actually see a more active climate with higher chances of precipitation. 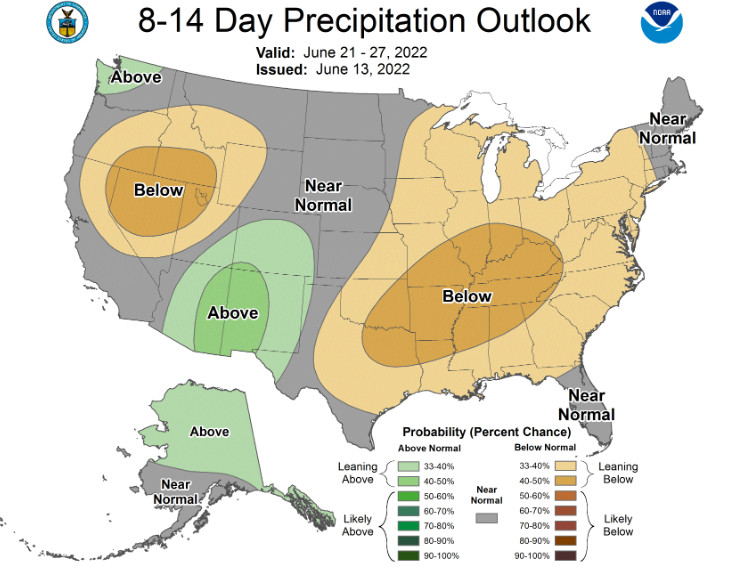 It’s going to be hot today, no doubt. Probably the hottest day so far this year and potentially the hottest day since last June. There is a remote possibility that we will even reach the century mark, which would be the first time since May 28, 2018, more than 4 years ago.

Keep in mind that the Twin Cities have only reached 100 degrees or higher 66 times in recorded history. The hottest day was July 14, 1936 when the mercury rose to 108F in the Twin Cities metro. By comparison, Phoenix typically sees 111 days out of 100 each year. ugh!

Excessive heat concerns have been posted today across much of the region for heat index values ​​that could approach 105F. If you have to be outside today, be sure to take plenty of breaks and drink plenty of fluids. Hopefully, you can escape to an air-conditioned place to withstand the scorching afternoon sun.

According to NOAA, heat is the leading weather-related cause of death in the US, killing more than 100 Americans each year. Know the signs of heat illness and stay safe!

1943: Torrential rains cause flooding in the Twin Cities and east central Minnesota. 2.5 inches of rain falls on St. Paul in two hours. Also, four trams are struck by lightning. 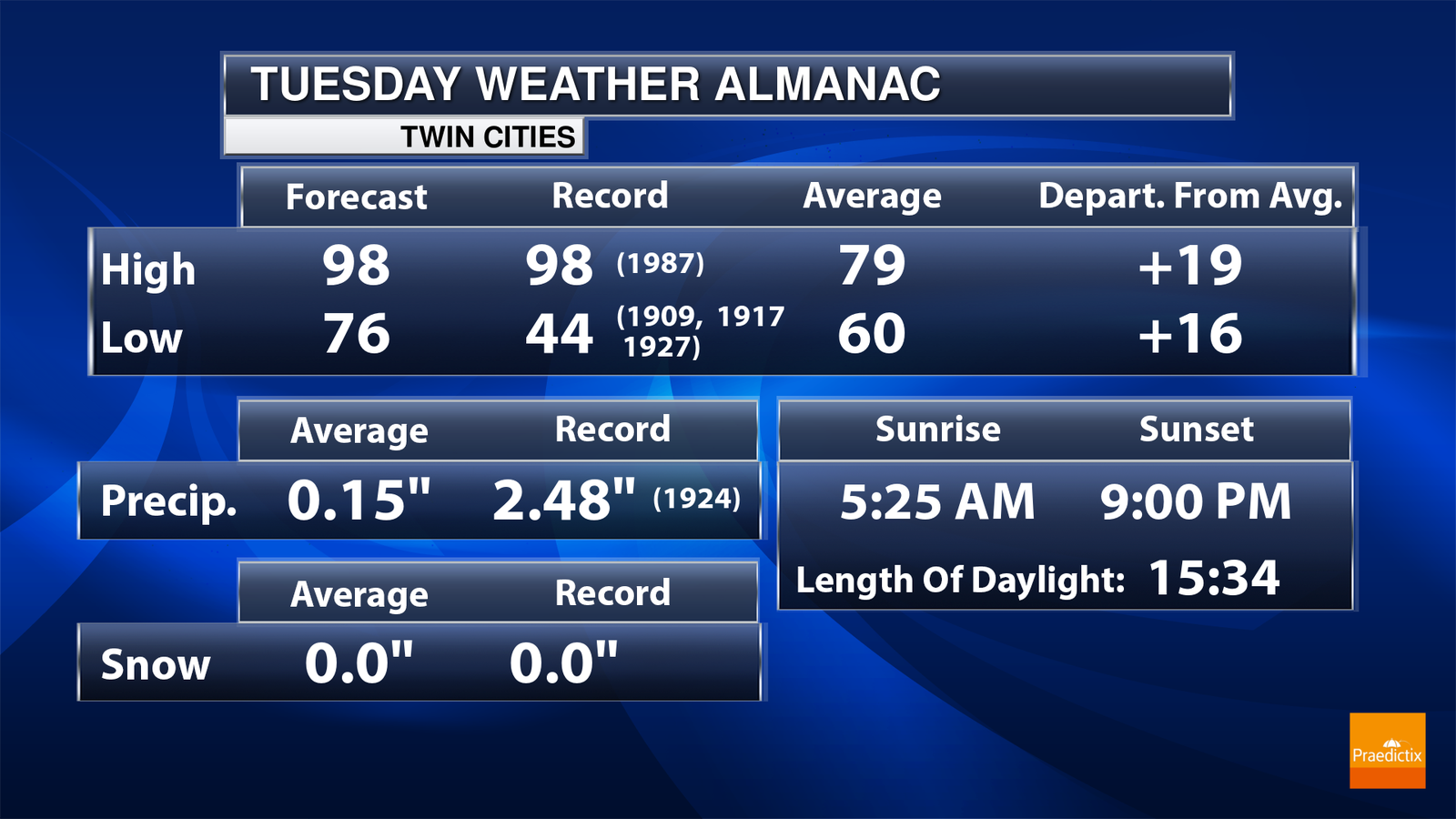 “11:14 p.m. CDT (May 15) Flowers abound everywhere this time of year. This moon was also known as the Full Corn Planting Moon or the Milk Moon. This full moon will also suffer a full blood moon lunar eclipse. North America will have a front row seat to it, as totality will occur between the late afternoon hours of May 15 and the hours after midnight May 16, depending on your location. Totality will last 85 minutes.” 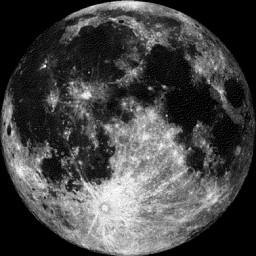 The weather forecast for Saturday shows temperatures well above average across the southern and southwestern US, with record highs possible in many places. Some of this heat could be life-threatening with heat index values ​​reaching 105F to 115F. 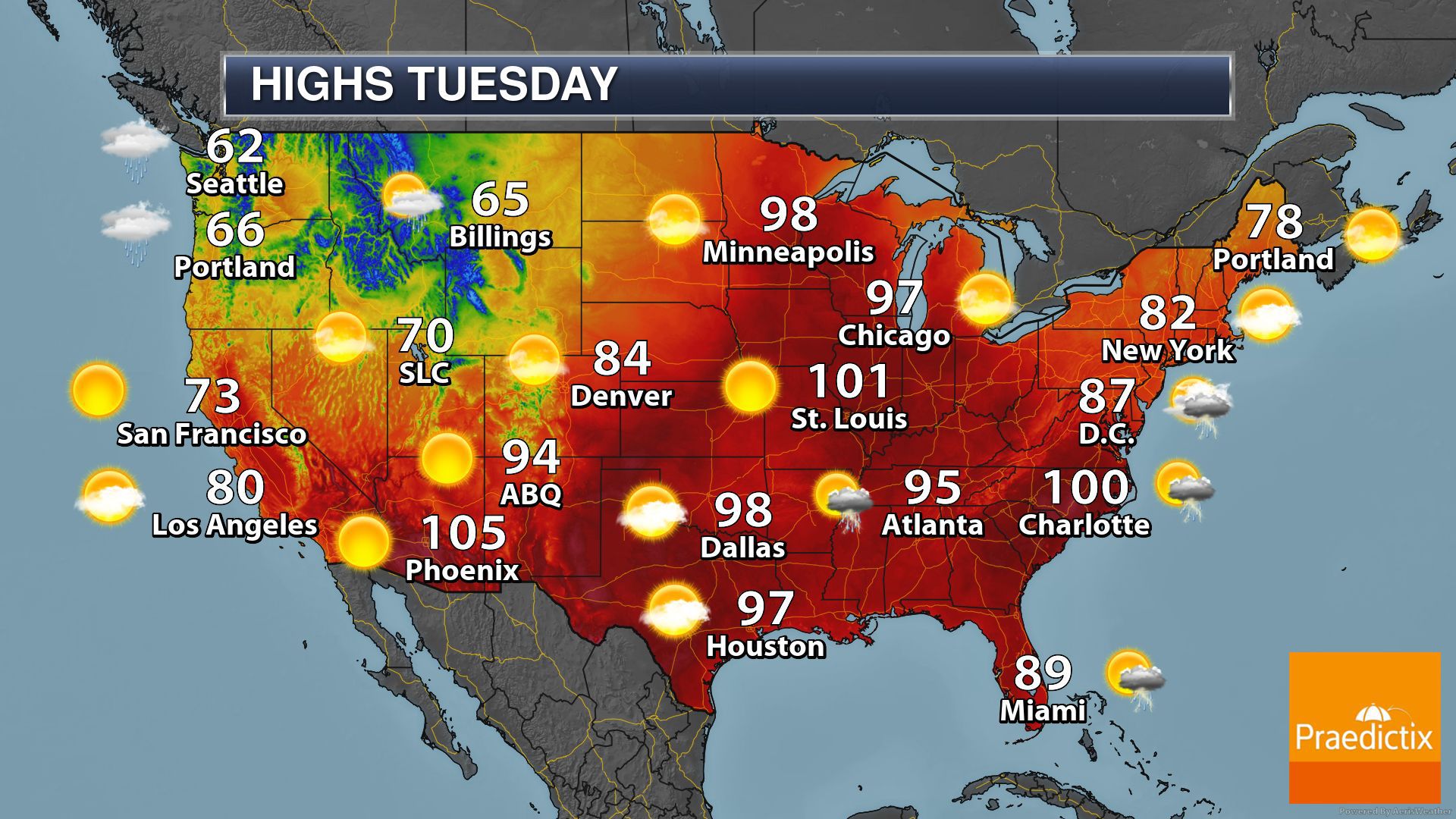 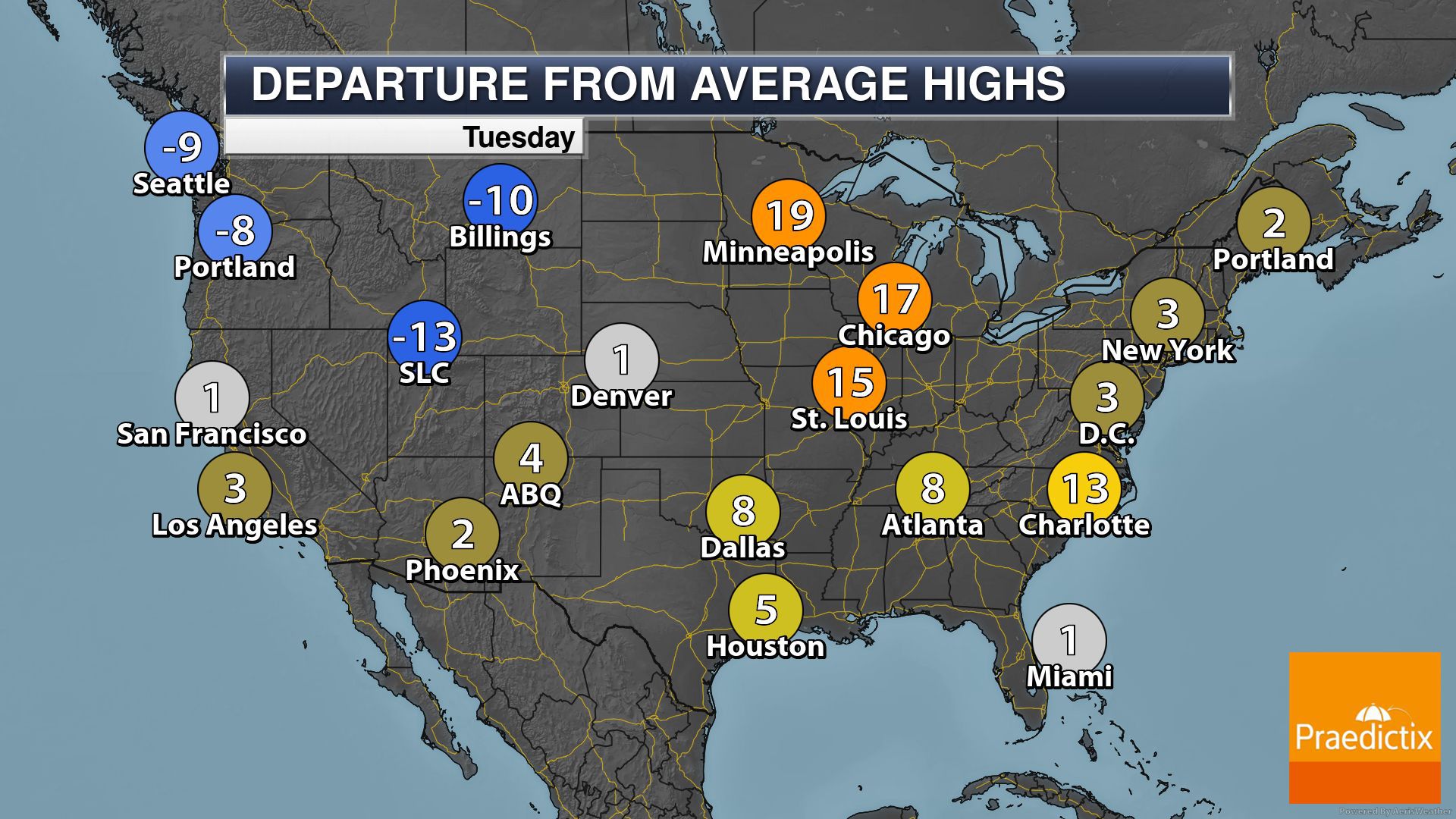 Here’s the national weather outlook through Wednesday afternoon, showing slightly more active weather across the northern tier of the nation. Please note that some of the storms can be strong to severe with local heavy rainfall.

According to NOAA’s Climate Prediction Center, areas of higher precipitation will be found in parts of the northern tier of the nation. There will also be more active weather in the Eastern US and possibly some monsoon moisture in the Southwest with a decent chance of rain in the Four Corners region.

“With the state experiencing the most severe early-summer drought conditions in nearly a decade, Texans are facing a wave of especially hot and dry weather that may kick off one of the hottest summers on record in the state,” says John Nielsen, a climate expert at Texas A&M University. Gammon, a regents professor in the Department of Atmospheric Sciences who serves as Texas state climatologist, Nielsen-Gammon said the state has already been experiencing temperatures aboveaverage temperatures this year, with last month tied for the second hottest May in Texas history.

“The La Niña weather phenomenon, which has affected global temperatures and worsened drought and flooding, is likely to continue for months, and possibly even into 2023, the UN warned on Friday. La Niña refers to large-scale cooling of the surface temperatures in the central and eastern equatorial Pacific Ocean, which occurs every two to seven years. The UN’s World Meteorological Organization (WMO) said there was a 70 percent chance that the prolonged La Niña event, which has had the world in its grip almost continuously since September 2020, it will continue until at least August. “Some long-term predictions even suggest it could persist until 2023,” it said in a statement.

“The Lone Star State is being hit by hot temperatures and dry weather. The City of Austin is beginning to feel the effects of the ongoing drought in the american southwest. Earlier this week, Austin began enforcing restrictions as the water stored in Lakes Buchanan and Lake Travis dropped significantly, the Austin American-Statesman Reported. Under stage 1 drought restrictions, residents can use hose-end sprayers only twice a week, and restaurant servers can only serve water if a customer requests it. KUT reported. Residents can only water through irrigation sprinklers once a week, at night. Anyone who violates these rules could be fined up to $500, according to the statesman. This is the first time in three years that the state has issued water restrictions.”

What channel is Warriors vs. Celtics today? Time, TV schedule, live broadcast for Game 5 of the 2022 NBA Finals

A Civilized Discussion on Amending the Ohio Constitution to Allow Abortion: Today in Ohio Special Episode