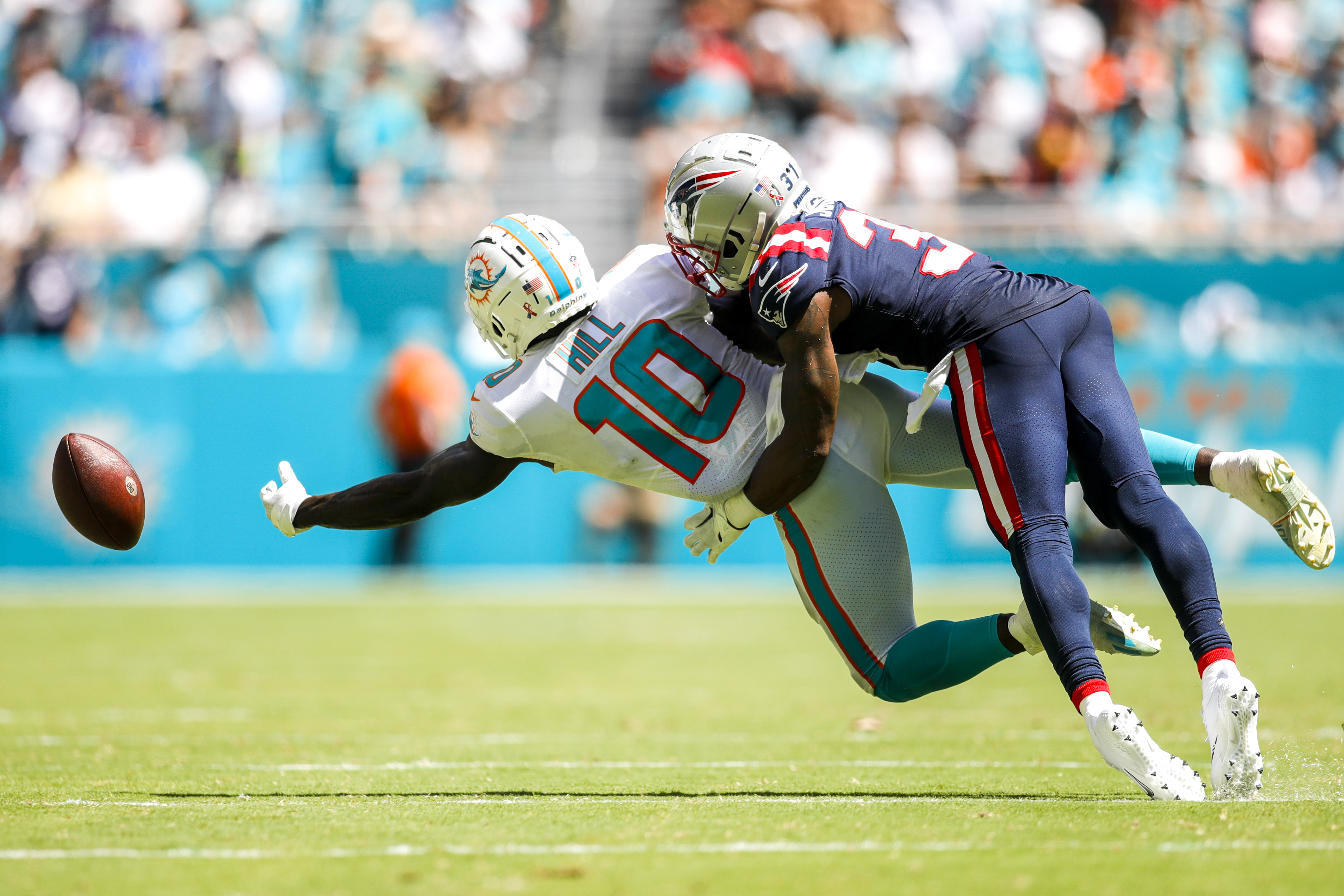 This seems completely counter-intuitive, right? Fast receivers like Hill and Waddle use the threat of downfield acceleration to keep cornerbacks from pressing them down the line. The idea is that if you push these guys, and they make a good move on you, it’s all over. That’s certainly a legitimate threat as we’ve seen, but you’re not necessarily in better shape defending Hill and Waddle out of cover. Especially in the Ravens game, we saw that speed receivers also gain acceleration in the number of yards you give them as a cushion. And if those guys are running you vertically, and then they change direction, you’re equally screwed.

The only possible counterattack is to at least force Hill and Waddle to push (or remove) the jams in the lane before they go vertical. The Bills do this well for two reasons: They have naturally aggressive rushing cornerbacks and they have two standout safeties in Micah Hyde and Jordan Poyer to limit damage downfield. Correct assignment with your deep defenders is crucial when facing fast receivers, and the Hyde/Poyer combo has this down to a science. Hyde will be out for this game., which is a hit, but the Bills are supposed to fix that. Backup Jaquan Johnson has enough experience to disguise himself as coverage, which should be an important part of the Bills’ defensive strategy.

It’s interesting to see what the Bills’ security situation looks like with Micah Hyde out. Jaquan Johnson (No. 4) has experience in Buffalo’s fake coverage, and the communication seems to be there.

Jordan Poyer is the guy they can’t stop Miami’s passing game without. pic.twitter.com/l3aghDNjyF

Another reason you want to jam Hill and Waddle on the line is that it forces Tua Tagovailoa to reset his clock: if he successfully modifies their routes, the timing and pace of the play is different, and Tagovailoa is a timer. and -rhythm launcher on top of everything.

Tagovailoa also threw two interceptions against the Ravens, and this interception with 10:42 remaining in the first quarter on a target at Hill shows the value of pressing Hill even if the effect isn’t immediately obvious.

Hill (No. 10) greases cornerback Marlon Humphrey (No. 44) off the line with a foot-fake, but the timing of the play it is affected. It’s a progressive reading pitch where Tagovailoa starts on the right and hits Hill in the rear based on what he sees. Tagovailoa doesn’t have much time to do any of those readings: He needs to be on a 1-2-3 pitch schedule. When Hill returns to the end of the route, Tagovailoa has him a little behind and safety Marcus Williams (No. 32) can pass him.

Fortunately for the Bills, both rookies have proven capable of taking on NFL wide receivers in media coverage, and have been since the preseason.

Elam (No. 24) has already shown in the NFL what he showed in Florida: He’s a sticky, aggressive defender who isn’t afraid to rush receivers down the line, and he excels at man and game concepts. This PBU against his rookie teammate Alec Pierce of the Colts shows all of his traits in a positive way.

Villanova’s alum Benford is another guy who isn’t afraid to pressure and attack receivers from the snap. His pass breakup this preseason came against Colts veteran Michael Pittman, and it was impressive to see how Benford (No. 47) recovered from Pittman’s initial charge to reset and move the ball away.

Obviously Hill and Waddle present more serious challenges. But that doesn’t necessarily mean the Bills are completely lost just because they have a couple of rookies lying around.

“It all comes down to the end of the day, just communication,” Poyer said this week. “Just making sure that we on the back end, we’re all on the same page. [The rookie corners], I trust them. I know if I get a call, I can tell them a call and they can execute it.”