Today, across the state of Arkansas, an oppressive combination of high temperatures and high humidity will make it feel like it’s above 100 degrees, according to the National Weather Service in North Little Rock.

“High heat index values ​​will exceed 100 degrees statewide on Thursday,” the Weather Service said in a Twitter post Wednesday afternoon. “The highest heat indexes will be in the central and eastern parts of the state where a heat advisory is in effect.”

It will feel like 109 degrees in Hardy, 107 in Searcy and Russellville, and 106 in Little Rock, Pine Bluff and Brinkley, according to the Weather Service. In Fayetteville, Mena and De Queen, it will only feel like 100 degrees.

Two separate heat advisories are in effect covering most of the state, including the eastern half and stretching southwest through Garland and Clark counties.

It will feel particularly oppressive in northeast Arkansas, said Jeff Hood, a meteorologist with the Weather Service.

The high temperature is forecast to reach 99 degrees today in Jonesboro and 100 degrees on Friday. And that’s before moisture is factored in.

It will only be a bit cooler in Little Rock, where the high today and Friday is forecast to reach 98 degrees.

The City of Little Rock opened a cooling area at the East Little Rock Community Center on Wednesday, but it was unclear if it would reopen today.

Spencer Watson, a city spokesperson, advised people to check “Latest News” on the city’s website, https://www.littlerock.gov, or on social media for the status of the cooling center. . The Community Center is located at 2500 E. 6th Street. The phone number is (501) 374-2881.

“Residents are encouraged to check with neighbors, especially those vulnerable populations at risk of complications from extreme heat,” the city said in a news release. “These include adults 65 and older, children under 4, and people with disabilities or existing medical conditions. People who exercise outdoors should pace themselves and schedule exercises to avoid the midday heat. Pets should have a adequate water supply and be monitored for signs of heat, exhaustion or illness. No one should ever be left in a parked car.”

The Arkansas Department of Health sent out a press release encouraging people to practice “thermal safety.”

“Heat stress is a heat-related illness caused by the body’s inability to cool down adequately,” according to the statement. “The body normally cools itself by sweating, but under certain conditions, sweating is not enough. People who are at higher risk of heat stress or heat-related death include children under four, people over 65 years or older, anyone who is overweight, and those who are ill or taking certain medications.

Simple tips to prevent heat stress, according to the Department of Health, are:

• Stay in an air-conditioned area during the hottest part of the day. If your home doesn’t have air conditioning, consider public places like a library, senior center, or shopping mall.

• Avoid heavy work or unnecessary activities if you are outdoors or without air conditioning.

• Avoid unnecessary sun exposure. Wear a hat and sunglasses when you are in the sun.

• Use sunscreen with an SPF of 15 or higher as directed and reapply as needed.

The most common heat-related illnesses are heat stroke, heat exhaustion, heat cramps, sunburn and heat rash, according to the Department of Health.

Brandi Hinkle, a spokeswoman for Entergy Arkansas, said the utility was not asking customers to conserve energy due to the heat wave. But she said it’s a good idea to postpone the use of major appliances (washers, dryers, dishwashers) during the peak hours of 1 to 7 pm to decrease energy demand in very hot weather. Entergy had other tips on their website at https://www.entergy.com/energyefficiency/.

Hood said high temperatures will be a bit cooler this weekend, but oppressive heat will return to Arkansas next week.

He said there probably won’t be any record breaking this week, but temperatures will be above normal for the next two weeks.

“It’s the middle of June, starting to be that hot, dry time of year,” he said. “This is nothing we haven’t seen before.”

According to the National Weather Service Climate Prediction Center at https://www.cpc.ncep.noaa.gov, there is a 40% to 50% chance that Arkansas temperatures will be above normal through August. 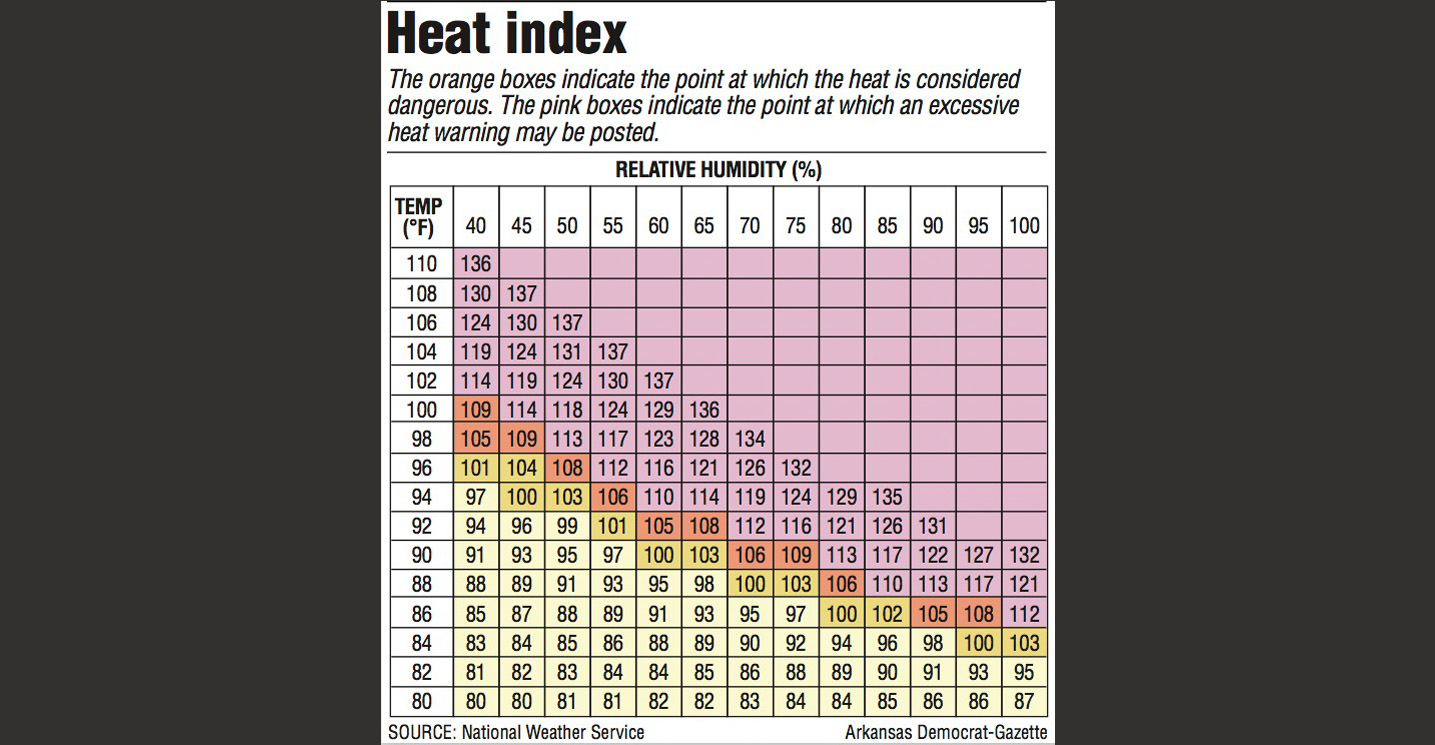