It’s hard to think of many other Fed announcements with more potential volatility than today’s. 4 trading days ago the market knew exactly how much the Fed would raise and we had a pretty good idea of ​​what the Fed would say overall. Then last Friday’s CPI appeared and scattered all the carefully placed pieces on the war room map of the bond market. Now the Fed can raise 75 bps instead of 50 bps. Some wacky talking heads are asking for 100bps (the operative word is “calling”, because anyone who actually predicts what will happen today is… well… just wrong). In fact, even 75 bps, which is almost fully priced based on Fed Funds Futures, is not a foregone conclusion. The Federal Reserve has options, and they can create several very different starting points depending on how they use them.

The first option is whether to upload 50 or 75bps. Is this really an option? After all, the market has priced in a 100% chance of a 75bp hike and a very small chance of a 100bp hike. 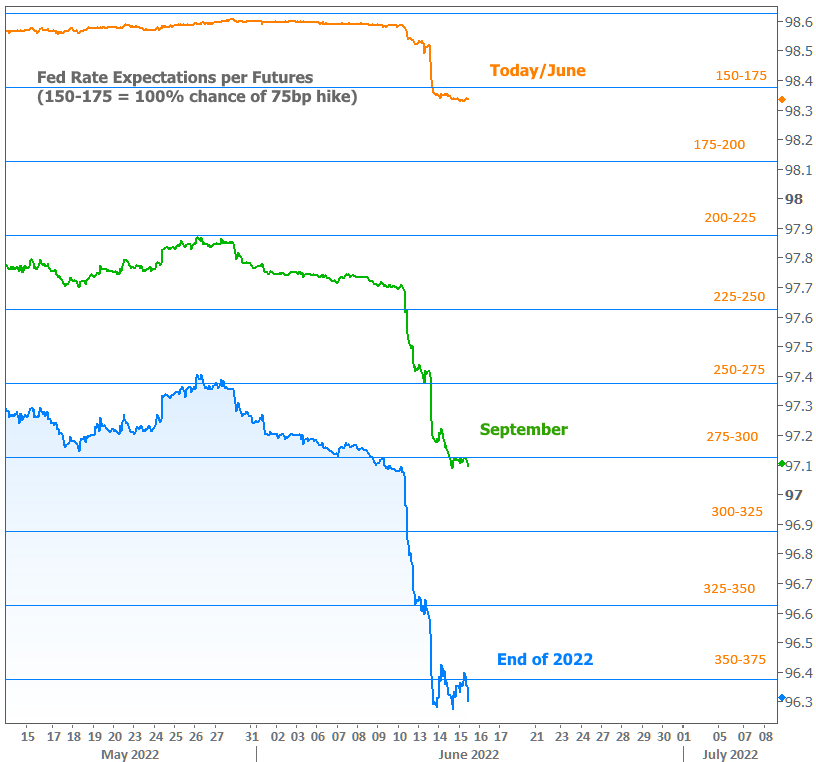 This is silly. There is less than zero percent chance of a 100 bps increase (I know… the math doesn’t make sense, but it’s new math…) Also, while a 75 bps increase is probably a bit more likely than a 50 bps hike, The market will likely be surprised to learn how viable the 50 bps hike was when we finally get a chance to review the full Federal Reserve transcript five years from now. In fact, they may even release that discussion in the Minutes 3 weeks from now, or maybe even today’s press conference.

The point is that the Fed previously said that 75 was not on the table unless inflation changed in a major way, and it is arguable that a single better-than-expected CPI report constitutes a major change. The Fed can characterize that as the latest death toll on hyperinflation based on a preponderance of other data and an economic slowdown that suggests a turnaround has been taken. In this way, the Fed could send a quietly dovish message, even with a 75bp hike, or an overtly dovish one with just a 50bp hike.

Assigning probability to upside options is less important than simply understanding that there are options, and that some traders still think 50 is on the table, even though futures traders don’t.

Beyond the walk, the dot plot is extremely relevant, as is the post-meeting press conference with Powell. In fact, the realization of a 50bp vs. 75bp rate hike is likely to be much less important than the points and press conference this week. That said, a 50bp rally would certainly lead to a major reaction at 2pm, especially if accompanied by dovish points. Some people are worried that the market will freak out in that case, with the thesis that the Fed has its head in the sand regarding its duty to fight inflation. If I were Powell in that case, I’d say “I…look at how much the market has done to do our job for us. Policy communications have already turned the housing market into a dime and crushed stock valuations.” “The ball is definitely working based on our 50 bps hike outlook. We’re trying to design a soft landing, not a hard landing. Get back to work and stop freaking out.”

At this point, the biggest argument for a 75bp hike is that the market has priced it in, so the Fed can walk through that open door if it wants to. If so, the best case scenario would be to have a “moderate 75” accompanied by a press conference saying that 75 bps gets them to a point where rates will stabilize sooner, and lowers the odds of a rate of similar size. hikes in the future.

Bottom line: The Fed has already reacted in a ridiculously huge way when it came to the risks of rising inflation. There is no point in going big on rate hikes when the deflation balls may already be rolling.